This airy dream-like song, titled Kronos, is an original by Jamael Dean and a single from his album Black Tapes Space. Jamael explains his album’s title: “Black is used to give reverence to the spirit of nothing that preceded all in the universe which, throughout the album, is referred to as Akamara. Space is used to allude to the ever-expansiveness of our beings, matter, and time itself. Tapes shows the marriage of those two ideas (i.e the stickiness of tape) and how the album is a vessel of sound that grows with you (i.e. cassette tapes). Black Space Tapes shows the evolution of how music played a role in my life, from jazz to rap and beyond that. It’s a river of shifting patterns, and temperatures that show we as humans are instruments striving towards harmony in nature.” Jamael performed Kronos alongside Sharada Shashidhar on vocals, Devin Daniels on alto saxophone, Mekala Session on drums, and Chris Palmer on bass.

Jamael shares a deep connection with his grandfather, who introduced him to music and a world of talented Black artists. Jamael invites us to explore how all forms of music — jazz, R&B, samba, cumbia, pop, country, classical, and k-pop — are influenced by Black culture. What is your favorite style of music? Please spend time researching your favorite type of music and honor the Black artistry and ingenuity that has brought us a rich array of sounds and more!

Which artists have shaped your creative evolution?

The first artist to shape my creative evolution would be Donald Dean. My grandfather had a huge impact on me as a child because of how fun it was to go to his gigs. It was freeing to see him interact with his friends in hilarious ways and get back on the bandstand to share that same feeling with everyone there. He introduced me to the music of Thelonious Monk, Bobby Timmons, Ahmad Jamal, Herbie Hancock, and a lot of other artists. Some of the artists who left the biggest impact on me were Horace Tapscott, Alice Coltrane, Sun Ra, Mary Lou Williams, Randy Weston, and Kenny Kirkland. I learn something new every time I listen to their music. Their music never gets old.

How did you first get introduced to your instrument and why did it speak to you?

I got started on the piano after playing violin in school when I was spending a lot of time on video games. My parents eventually took them out of our house and so I asked for a piano shortly after. I asked because I loved hearing my grandfather play with Les McCann and the sound of the piano and keyboards in their music. It made me pay attention to that more in other music too. They got one for me as a gift and I kept at it.

What social messages do you convey with your art and compositional style?

What I portray musically and compositionally is my love for what came before. Just like my grandfather passed on the knowledge of a lot of great music to me, our ancestors have done the same historically and I aim to capture and honor that in my music.

How do you and your community honor and uplift the legacy of Juneteenth?

Juneteenth is a time of celebration for my community and me. It’s a time to be grateful for our health and family, and to remember that which has been lost. We uplift each other by embracing our roots which usually takes the form of festivals involving good food, music, a lot of art, and support from everyone there. 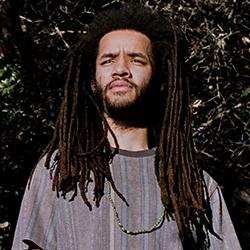 Jamael's music reflects the dual influence of his Los Angeles contemporaries and jazz ancestors, including Sun Ra, Alice Coltrane, Herbie Hancock and soul jazz drummer Donald Dean — who is also his grandfather. LA, he says, is “the only place I can go in the same day to a jam session with music from the 20s and 30s to another session with music in the 40s through the 80s, and after that play music with my friends from that era onwards."