A spontaneous improvisation leading into a solo performance of Josh Johnson's song "Western Ave" from his 2020 release, Freedom Exercise. "Western Ave" is an Afrobeat-inspired tribute to Chicago and Los Angeles, cities that have been important to Josh's personal and musical growth. Both cities also share a thoroughfare of the same name, Western Avenue.

In his interview, Josh shares with us that he’s “inspired by the folks who've been making their voices heard in the street, and who continue to push us all.” Who are the change-makers, activists, and cultural workers who inspire you? Spend a few minutes looking into some local Black change-makers and follow, highlight, and/or fund and support their work.

Which sounds and artists do you currently have on rotation?

What texts or books do you source as inspiration?

Everything experienced serves as inspiration. James Baldwin is a forever inspiration. The writings of Fred Moten, Octavia Butler, and Morgan Parker have been inspiring me this year.

Which activists and change-makers inform and inspire your work?

I'm inspired by the folks who've been making their voices heard in the street and who continue to push us all.

How do you and your community honor and uplift the legacy of Juneteenth?

Fellowship and reflection on the beauty and richness of blackness. My birthday is the day after Juneteenth and I can't help but feel that continuing to grow and having life is uplifting the legacy of Juneteenth. 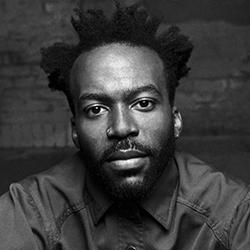 Josh Johnson is a saxophonist, keyboardist, multi-instrumentalist, and composer. He has performed extensively with the likes of Jeff Parker, Kiefer, Makaya McCraven, Miguel Atwood-Ferguson, Leon Bridges, and Marquis Hill.

Johnson can be heard on records by all of these artists, as well as records from the Chicago Underground Quartet, Jeremy Cunningham, Mark de Clive-Lowe, Dawes, Dexter Story, Louis Cole, and Joshua White.

Since 2018, Johnson has been the musical director, keyboardist, and saxophonist for Leon Bridges, which has taken him to Europe, Asia, and Australia. Highlights of his time with Bridges include sold-out performances at Radio City Music Hall, Greek Theater, and the Hollywood Bowl.